When the late, great Anthony Bourdain unexpectedly left us, hearts were collectively broken across the world. He was a culinary traveler, host, writer, connoisseur, drinker, epicurean, and a receptacle for many other labels. Whatever the descriptor, it’s clear Bourdain meant a lot of things to a lot of people. So let us rejoice in his legacy and celebrate his cultured footprint, and remember him through the eyes of one of his favorite cites, Hong Kong.

Anthony Bourdain, we miss you.

By the time you read this, the last season of Anthony Bourdain: Parts Unknown will be coming to a close. It was the final series he worked on before he died and he was fittingly awarded his fifth Emmy Award for his work on the show posthumously. One of the most special episodes of the series also happens to be the final one he ever worked on and it was shot in a city that was close to his heart, Hong Kong.

“The Star Ferry at Kowloon at night. The lights of Hong Kong behind me. It’s a gift, a dream, a curse, the best thing, the happiest thing, yet also the loneliest thing in the world.” This is part of Bourdain’s opening monologue and, being some of the last moments of television he’d ever make, there are sprinkles of foreshadowing in his discourse and the episode as a whole.

However, the episode is more of a celebration than an epitaph – it is an ode to a city he was deeply fond of and a great tribute to Hong Kong and the man himself. Over the course of his 18 years as travel host, Bourdain produced nearly 300 episodes of television for three different networks, and Hong Kong was a place that he kept returning to. It was featured in The Layover, No Reservations and, of course, Parts Unknown. In each of these Hong Kong episodes, his giddy inner child shines through. “I’m constantly asked ‘what’s the greatest food city in the world?’ and no one can say you’re wrong if you say Hong Kong,” says the travelling chef while the hustle and bustle of the city whizzes around him in the Hong Kong episode of The Layover. The episode sees him trying his hand at kung fu (he professes his love for Asian cinema) eating intestines on a stick and being served noodles by bodybuilders. 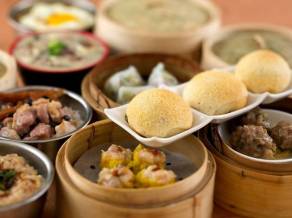 In the episode he eats his way across the city and dines on dim sum at Tim Ho Wan (9-11 Fuk Wing St, Sham Shui Po, Kowloon, Hong Kong), has a meal at Fuk Loi Kui, an outdoor dai pai dong (6 Kei Lung St, Prince Edward, Kowloon, Hong Kong), and he buys a knife at Chan Chi Kee Cutlery (316-318 Shanghai St, Yau Ma Tei, Kowloon, Hong Kong). “A city where great food is a birthright and almost taken for granted,” Bourdain observes of Hong Kong towards the end of the 40-minute episode, during one of his classic epilogues.

In another Hong Kong episode in the third season of No Reservations, he laments similar praise for the city. “This is such an amazing food culture, I mean look at all these people, they are all eating well,” he says while sitting at the bustling Tung Po (2/F, Java Rd Municipal Services Bldg, 99 Java Rd, North Point, Hong Kong), an eatery CNN have called the wildest restaurant in the city. During the episode he also has a chaotically enjoyable meal at Lin hung Tea House (162 Wellington St, Sheung Wan, Hong Kong), which he says is “old school dim sum from the dinosaur era.”

However, while these previous episodes of the city were wild ecstasy rides, his final definitive piece of Hong Kong television is slower, more meditative and shot with a soft, warm glow. Instead of dizzying timelapses and jittery camera whips, there are slow, brooding and contemplative slow-motion shots, accompanied by tight close-ups and unique angles.

Interestingly, the final Hong Kong episode happened to come together fortuitously. After years of reaching out to work with his cinematographer idol, Christopher Doyle, Bourdain finally had a ticket back to Hong Kong to film an episode with him. In addition, during the ninth hour of preparation for the episode, Bourdain’s director girlfriend, Asia Argento was called in to replace the arranged director, who had been hospitalized for emergency surgery.

The result is television gold. Argento, Bourdain and Doyle are each prodigious geniuses in their own right, and the chemistry among the trinity immediately is visible on screen. It was a trifecta of talent – a perfectly balanced equation and a match made in heaven. In fact, it is one of the most visually-compelling episodes from any of Bourdain’s shows and it is clearly his magnum opus (he even said later he was ecstatically proud of it).

The enchanting episode takes him from the picturesque old China Cafe (1077A Canton Rd, Mong Kok, Kowloon, Hong Kong) to the more hip and funky Happy Paradise (UG/F, Ming Hse, 52-56 Staunton St, SoHo, Hong Kong), with great conversation and insights shared along the way, in typical Bourdain style. His grounded understanding and informal openness is something that the world will miss.

Although often described as a culinary rock star, Bourdain was an honest, humble and down to earth human being with a strong moral compass. Like his love of dai pai dongs, he found beauty even in the grittiest of back alleys and watering holes. He had a unique perspective and brought a sense of humanity to the travel and cooking show genre.

Bourdain encouraged open-minded travel, and ignited passion for food, music and different cultures amongst his audience. There is a significant void left by the nomadic chef’s passing, and it is pretty safe to say it will be never be filled again. So, next time you find yourself sitting on a plastic chair under a flickering neon light eating a modest sandwich or a bowl of noodles, think of Bourdain, and remember that sometimes it’s the little things that make life big.