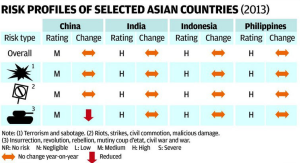 According to leading risk management provider Aon, the continued menace of terrorist attacks and political violence is becoming a threat to global business growth. Its 10th annual Terrorism and Political Violence Map released this year reveals that 44 per cent of countries across the globe have an identifiable risk of terrorist attacks.

Waning civil unrest associated with financial and economic crises gave Europe the most positive regional outlook, with 47 per cent of nations having lowered risk ratings on last year. In contrast, Asia-Pacific was shown to be the worst affected area, with high-risk countries such as Afghanistan, India, Iraq, Nigeria, Pakistan, Syria, Thailand and the Yemen having a knock-on effect for the region.

Julian Taylor, managing director of Aon Risk Solutions’ crisis management and trade credit in Asia, says that businesses throughout Asia have to accept that they are at risk from a broad spectrum of political and social perils, both at home and abroad.

“Almost all countries in Asia have experienced civil unrest in the past 12 months, with China the most protest-affected country in the world, and the likelihood of further unrest around the region in 2013 remaining high,” Taylor says.

He adds that economic growth throughout Asia has also meant an increase in overseas investment, often in very high risk parts of the world, where businesses need to take prudent risk management steps to mitigate all risks.

“Asian companies are expanding into the world more and, as they do so, they are starting to realise that the world is not such a safe place,” says Sam Olsen, managing director, Kroll Advisory Solutions. “They have become aware of the importance of crisis management preparations, as there are issues with emergency support in emerging economies where even something as simple as someone breaking an arm can be a significant risk to business continuity.”

Olsen says that, to mitigate these risks, companies need to craft well-thought out crisis management plans, select a good provider of intelligence to prepare emergency strategies and simulate these plans to prepare employees not to panic.

Richard Dailly, managing director for Kroll Advisory Solutions in South and Southeast Asia, stresses that companies should do as much homework, and gather as much information as possible on the area they are investing into and the people they are working with.

“One needs to be confident that fellow investors and partners are operating in a compliant and ethical manner. These markets are often highly politicised, so we would recommend not only a detailed understanding of the macro politics of a region, but also delving into local detail. Investors need to know about land rights, movement of people, the local environment and working conditions. Failure to have a handle on these issues can lead to huge reputational and legal problems that can dramatically affect the value of a business,” Dailly says.

Yoel Sano, head of global political and security risk at Business Monitor International, believes that companies should distribute their investment across key countries, and he thinks that a range of insurance policies are integral to effective risk management.

“Companies should not put all their eggs into one basket, and should maintain a spread across key countries. In terms of risk management, companies will typically buy political risk insurance of some sort to protect against trade credit risks, expropriation risks, and physical security risks. Currency risk is also a factor, and the companies can hedge against these.”

“We are of the opinion that as the decade goes on, there is the distinct possibility of major social unrest if political changes do not occur in the way certain sectors want. Hong Kong is not a perfect safe-haven and, like every other city in the world, there are issues and the possibility of social unrest,” Olsen says.

Aside from the obvious political and social risks, there is also the systemic risks from the banking industry in both China and Hong Kong.

“The concerns voiced are often about the growing complexity of the banking systems in these markets rather than their ability to withstand external shocks resulting from another deterioration in the global economy,” says Miles Johnstone, the regional director focusing on political risk in Asia at the structured credit and political risk unit of Aon Risk Solutions. “Most analysts agree that further reforms are needed to encourage balanced growth and to promote financial stability.”

Still, there is the possibility that political or social instability, unless checked, could have an economic impact. “As we are seeing in Egypt right now, when flows of foreign direct investment into a country slow, its fiscal and external accounts can worsen quickly,” Johnstone says. “This creates as escalating political crisis that, in turn, delays or prevents the negotiation of rescue packages from organisations such as the International Monetary Fund.”

He adds that while Asian economies “are somewhat insulated from a similar degree of risk”, the drop in exports due to falling demand from the US and Europe “leaves some Asian countries susceptible to residual political risks”.

He also points out that social unrest, mass demonstrations and widespread political violence can be triggered by government decision to slash subsidies for essential commodities such as food, petrol and power. Johnstone cites the food price riots in Malaysia in 2011 and in 2007-2008. “The ruling coalition was nearly ousted by voters who cited food and fuel price increases as their main concerns,” he says.

So what are the implications for Hong Kong and its business sector? “It is always difficult to predict the long-term future for protests and civil unrest in any environment, including Hong Kong,” Taylor says. “In the short term, although there are likely to be many, many demonstrations against the local and central governments [in Hong Kong], it is unlikely that these will ever really amount to such a level that serious physical loss or damage will occur. All of the demonstrations we have seen recently have passed off very peaceably.”