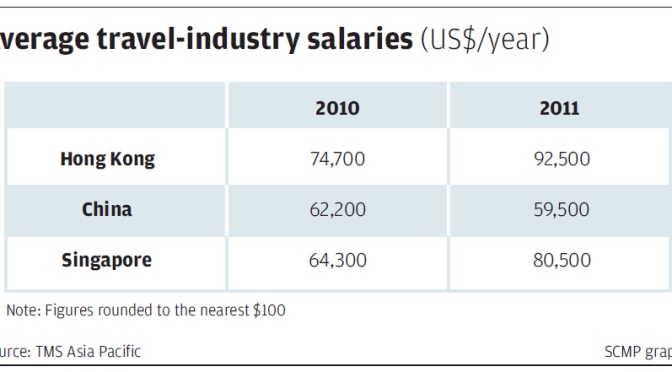 Despite a subtle sense of apprehension regarding the economic situation in Europe and the United States, things are looking up for those in the travel and hospitality industry.

A recent survey by TMS Asia-Pacific has found that travel and hospitality executives in Hong Kong boast the highest average salaries in the region.

But the situation across the border is looking slightly worse, with salaries dropping over last year, largely due to rising labour costs, inflation and a steadily appreciating yuan.

Commenting on the dominance of the Hong Kong market, TMS CEO Andrew Chan noted that Hong Kong has seen an unprecedented number of monthly arrivals recently – the bulk of which he attributed to visitors from the mainland to the north.

“The romance of travel has really bitten mainland China, and this is propping up the region,” Chan says.

“In Hong Kong, there were record arrivals in short-haul flights, and a lot of these were from carriers that operate between Hong Kong and China,” he says.

“The city’s proximity to Macau, meanwhile, further enhances its ability to attract mainland tour groups,” Chan adds. “The resulting rise in the number of arrivals has undoubtedly driven up travel-industry salaries, while also making the hiring landscape more competitive.”

The survey also found that – in contrast to previous years – the number of employees working in their current companies for 12 months or less has increased by 40 per cent, which “suggests that workers are starting to shop around a bit more,” according to Chan.

Meanwhile, the growth of new hotels and regional offices in the region has also driven up recruitment and competition for staff.

“The war for talent is driving up wages. So, while companies in Hong Kong are making more profit, much of it is being passed on to employees in the form of higher salaries,” says Chan.

To combat the situation, more companies are focusing on employee-retention strategies and creative ways to engage their staff, while also offering more flexibility and training to motivate them, Chan adds.

As to how the continued economic uncertainty might affect these trends, Chan says that the focus is still on recruitment for now, but that companies may start to look at retrenchment if the situation in Europe gets out of hand.

While this is not expected to have a hugely adverse effect on travel in the region, Hong Kong could be more greatly affected, due to its position as a business hub in the Asia-Pacific region, Chan notes.

In terms of the effect on travel industry salaries, Chan says that a European crisis would not have any drastic impact on the region at large.

But he says that Hong Kong could be more shaken due to its role as a centre of trade.