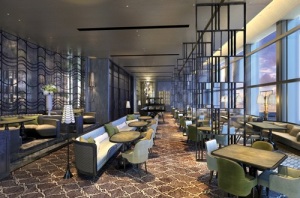 Making much better use of the space than the eatery that previously occupied the site is French Window, coming in as a grand addition to the Hong Kong fine dining scene up on the third floor of ifc Two in Central.

Like most things French, The French Window has an undeniable flair about it, with the interior bordering on art and the food quality coming close to perfection. However, while there is a touch of Frenchness about the interior and there is a French-inspired menu executed by Michelin-trained chef Mickael le Calvez, these are the Frenchiest elements of the restaurant, with the restaurant managed instead by the un-French Miramar Group; the concept helmed by Singapore’s Justin Quek; and the interior having been actually overseen by local design prodigies from AB Concept. Nevertheless, the French theme is still apparent throughout, with the interior loosely (and beautifully) modelled around a classical French château, and a erudite selection of predominantly old-world wines available to complement the food.

As a a rising star and modern prodigy of French cuisine, chef Mickael le Calvez does his best to create a nouveau Gallic menu, but the real star of this eatery is the designer Ed Ng, the founder and director of AB Concepts.  Created with his award-winning design team from AB Concept, the modishly nostalgic interior perfectly complements chef Mickael’s modern takes on French traditional cuisine – which sees thin tender cuts of lamb placed within a crispy tunnel of fried potato in one dish, and features a tantalizing combination of foie gras and beef carpaccio in another. In much the same way, the designers have also used a similar tapestry of styles and techniques in the design of the restaurant interior, with modern textures and colours effortlessly merging alongside purposely aged mirrors and gorgeous oversized hand-beaten wrought-iron light fixtures, inspired by Parisian street lamps. Alongside the antiquated mirrors there are also textured stone tiles and patterned glass screens, which resemble French windows (which are, by dictionary definition, tall glazed casement window panels). It is this kind of meticulous attention to detail that got the restaurant shortlisted for the UK-based Restaurant and Bar Design Awards in the International Restaurant category.

While these words will not be able to do the interior justice, an attempt must be made here, but do keep in mind that The French Window really is the kind of place that has to be seen to be properly experienced. Walking in from the blinding retail haven of the ifc mall outside is like going down Alice’s rabbit hole and entering another dimension, with the long entrance passageway bearing a resemblance to a French promenade (only indoors). Lush vertical garden panels and atmospheric lighting fixtures lead one down into the space of the restaurant, which emerges as some kind of château or salon, with a subtle homelike ambience permeating the space. This homey vibe comes across through the use of cosy fittings such as the soft carpeting, the mosaic floor tiles and the warm dashes of wood. Nevertheless, this homeyness is counterbalanced with a smattering of modish elements, which crop up in the form of the tantalizingly large wine cellar, the uplifting views of Victoria Harbour seen through the massive windows and the refined palette of cool grey, cream, and taupe tones. When paired with chef Mickael’s ambrosially delectable menu, this interior makes perfect sense and the aesthetic beauty of the environment is further enhanced by the food. Together, it is elements like these that give The French Window its class and finesse – this is an eatery to make Hong Kong proud.