Although it’s been happening for a while, 208 Duecento Otto officially secures Sheung Wan’s position as the trendy gentrified dining extension to Lang Kwai Fong and Soho, and when one experiences the idiosyncratic interior one can see why the official transformation of a district can rest on a single restaurant.

208 Duecento Otto is the kind of restaurant that makes us design addicts happy at Today’s Living. Although the design is stunning, this time we are impressed with more than just the aesthetics as the story behind the restaurant is just as appealing, and the people who put the hard work into the restaurant are just as deserving as the designers. Originally a two-storey frozen meat storage warehouse at the end of Hollywood Road, the Singaporean founder of JIA Boutique Hotels – Yenn Wong – decided to build on the success of her eccentric Philippe Starck designed hotel and, combining an attention-grabbing design scheme with a New York-style Italian-American bill of fare, this captivating restaurant was born. 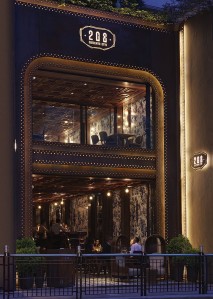 The main district-changing factor of 208 Duecento Otto is the eye-popping design of the place, with an attention to style and detail running inside and even out. As the first overseas project by a Turkish design firm called Autoban, the interior is a spectacular bohemian work of art, and it is clear to see this design firm won’t be strangers abroad after this. The exterior is marked by a striking intentionally-oxidized rustic-looking iron frame, which somewhat resembles an oversized Louis Vuitton suitcase. This is appropriate; given that Chef Vinny Lauria’s cooking style has been defined as “a New York interpretation of rustic Italian cuisine.” Inside the rusticness continues in the spacious bar area on the ground floor where sophisticated walnut wood squared panels decorate the ceiling and flooring, and somehow complement the blue and white ceramic wall tiling, which also bring in an extra touch of orientalism. Some dramatic overhanging lights stand out as well, appearing alongside gorgeous textured wooden tables, a slick marble bar counter, refined leather bar stools and old-looking holed stairs, which have a slightly nautical feel about them. Upstairs, there is more of a sophisticated ambience, with the walnut wood ceiling and flooring continuing alongside more ceramic tiles, but here they are complemented by some leather sofas, an authentic wood-fired Napoletana pizza oven (specially imported from Naples), and a spot of natural light coming in from the large window out the front.

Of course with such a spectacular design scheme it would be a crime if the food failed to make an impression as well, and luckily the Italian-American fare it does not even come close to disappointment. Overseen by Chef Vinny Lauria, formerly a cook at Mario Batali’s famous Babbo inNew York City, there is a home-made vibe to the food, with every dish prepared on-the-spot using the freshest ingredients available. Apart from the pizzas and antipasti, these are not your generic dishes, with many of the items featuring top-quality ingredients and a signature touch of creative flair, much like the rest of the restaurant. 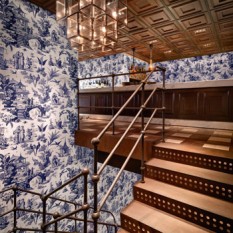 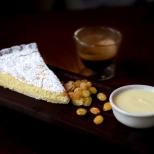