Having successfully gone from Malaysia to New York, the hot and slightly weirdly-named concept that is Fatty Crab has now arrived in Hong Kong with a bang.

A few years ago, when the concept of Fatty Crab was first opened by the expatriate Fatty Crew in New York City, the concept at first received a mixed reception amongst reviewers and diners alike. Having emulated and taken a name from a small no-frills hole in the wall in Malaysia, the group culturally tailored it slightly to the Big Apple market, with consistent elements such as the dingy interior and scrumptious large spicy crabs at the heart of the menu remaining. In time, the concept caught on and, like the accepting diverse foreign atmosphere that is NYC, the cultural import that was Fatty Crab grew to be an astounding hit. Now, the group has just brought the concept to Old Bailey Street in Hong Kong, home of the Hairy Crab. To make it work here, the group worked to customise the concept slightly more for the local market, with an upmarket and raw edgy styled interior making the restaurant perfect for the local Soho crowd.

While Fatty Crab New York featured warm cramped environs and droopy-trousered laid-back service, the Hong Kong rendition takes the restaurant in an entirely new direction. The sleek and stylish restaurant features not one, but two, bars and there are trained staff plus much more unique drinks and different dishes than the Big Apple version.

The space was designed by the talented Candace Campos, founder of ID Interiors & Identity Design. She worked closely with the Hong Kong restaurant managing team and the creators, Rick Camac and Zakary Pellacio, to realize their concept, piece for piece.

“The South East Asian influences are found in subtle design elements, just like the cuisine,” Campos explained. “I loved the challenge of bringing the New York Asian trend back to Asia, while still being authentic to Fatty Crab.”

From the exterior one already gets a sense of the modish rawness within, with shabby dilapidated walls retained from the original structure of the building standing out alongside some street graffiti. Through the window red tones and warm lighting lure one inside, where steel caged walls surrounding a bar greet one upon entry. Further in from here is also a raw bar, with a secluded leather-cladded booth area complete with timber panelling leading past the open kitchen to the main restaurant area. The main dining area itself features an east-meets-west design theme, with quirky 70’s Chinese newspaper wallpaper cropping up alongside colourful graffiti art, traditional Chinese crockery, distinctive lights plus oriental red and yellow tones.

Like the interior, the food and beverages are equally raw and fresh, with the mouthwatering dishes all executed with a touch of street chic. There is a unique drink menu crafted up NYC mixologist Philip Ward, which features concoctions such as ‘prison sex,’ ‘picklebacks’ (a shot of whiskey chased by a shot of pickle brine) and ‘where’s wallace,’ named after Fatty Crab’s only Chinese-speaking staff member. The food is of course the raison d’être, and highlights include the green mango and papaya salad, crabmeat cooked in a green curry sauce, smoked pork ribs and Fatty Duck. The deliciously messy Fatty Crab is of course a must-try as well, comprising a whole crab swamped in a giant soup of viscous yellow curry broth, served with huge slabs of toast.

It is clear to see the people behind Fatty Crab have now perfected their concept, with the food being almost good enough for true Malaysian crab enthusiasts, and the interior being up to international restaurant design standards. With a New York chic about it, one might suggest the décor is how they wanted the original NYC interior to look had they had enough funds at the onset. The way things are going now though, it looks like it won’t be long before they get their claws on more funds to take Fatty Crab to a new city. 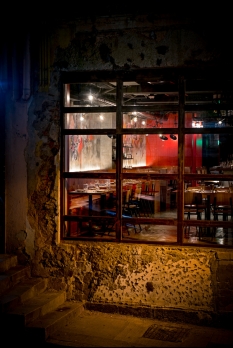 Located on Old Bailey Street, the exterior of Fatty Crab Hong Kong has a raw, rough nostalgic vibe about it.

From the exterior one already gets a sense of the modish rawness within, with shabby dilapidated walls retained from the original structure of the building standing out alongside some street graffiti.

At the atmospheric bar one can enjoy unique beverages such as the ‘prison sex’ cocktail.

This is the delectable chili crab.

Further in from the main bar are secluded leather-cladded booths complete with timber panelling.

Multi-armed sconces courtesy of Workstead, a Brooklyn-based design studio, protrude from the walls and ceiling.